Bees buzz through a hole in a tree trunk, inside which a colony of thousands has made its home. But they're not alone – they are being observed by a photographer who is seeing into the heart of their nest. This is a wild colony of western honeybees, established in wildlife photographer Ingo Arndt's back garden in Langen, Germany. 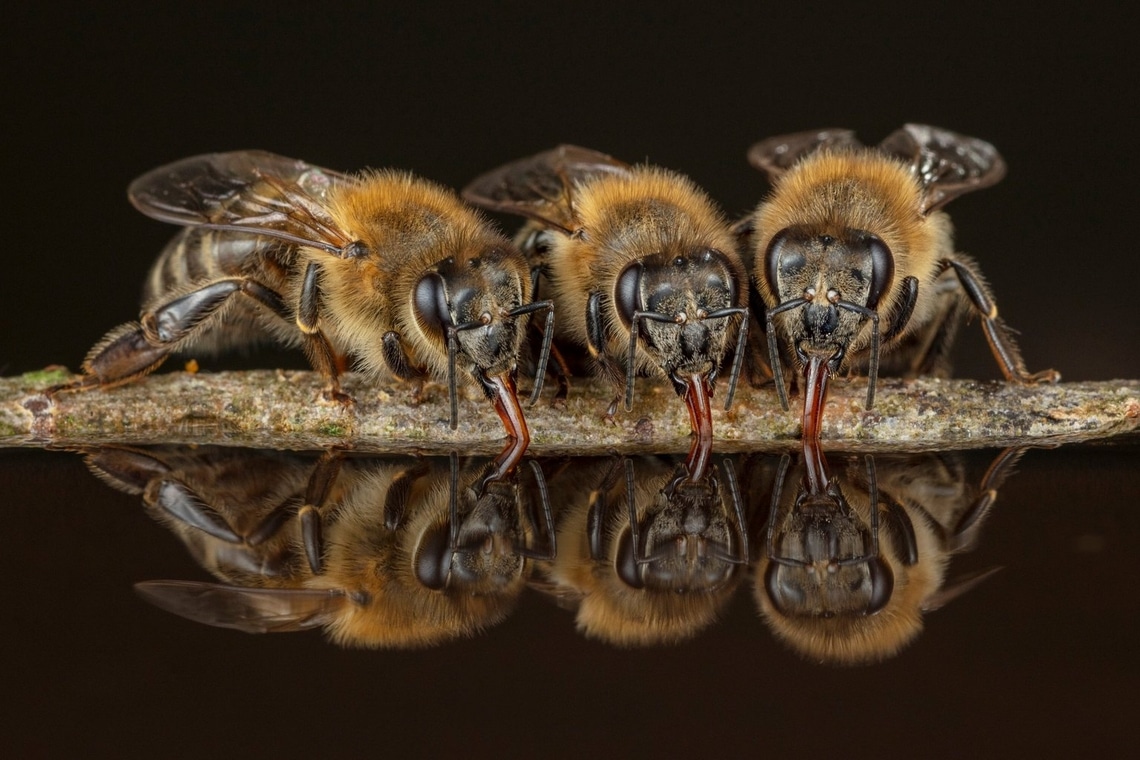 A regular category winner of the Wildlife Photographer of the Year competition over the years, Ingo has spent much of the past three decades capturing striking wildlife images around the world. After spending many months in the wilds of Patagonia photographing pumas, Ingo turned his attention closer to home in 2019. He’s since captured thousands of fascinating macro photographs of honeybees, some of which document previously unseen behaviour.

Working with scientists and researchers, Ingo brought a colony of wild living honeybees to him, allowing him to explore their private lives in entirely new ways. Here he shares how he built one of the largest photo archives on honeybees in the world and how his Canon EOS 5DS R, Canon macro lenses and Canon Speedlites enabled him to capture his tiny, fast-moving subjects in action and reveal some truly astonishing behaviour. 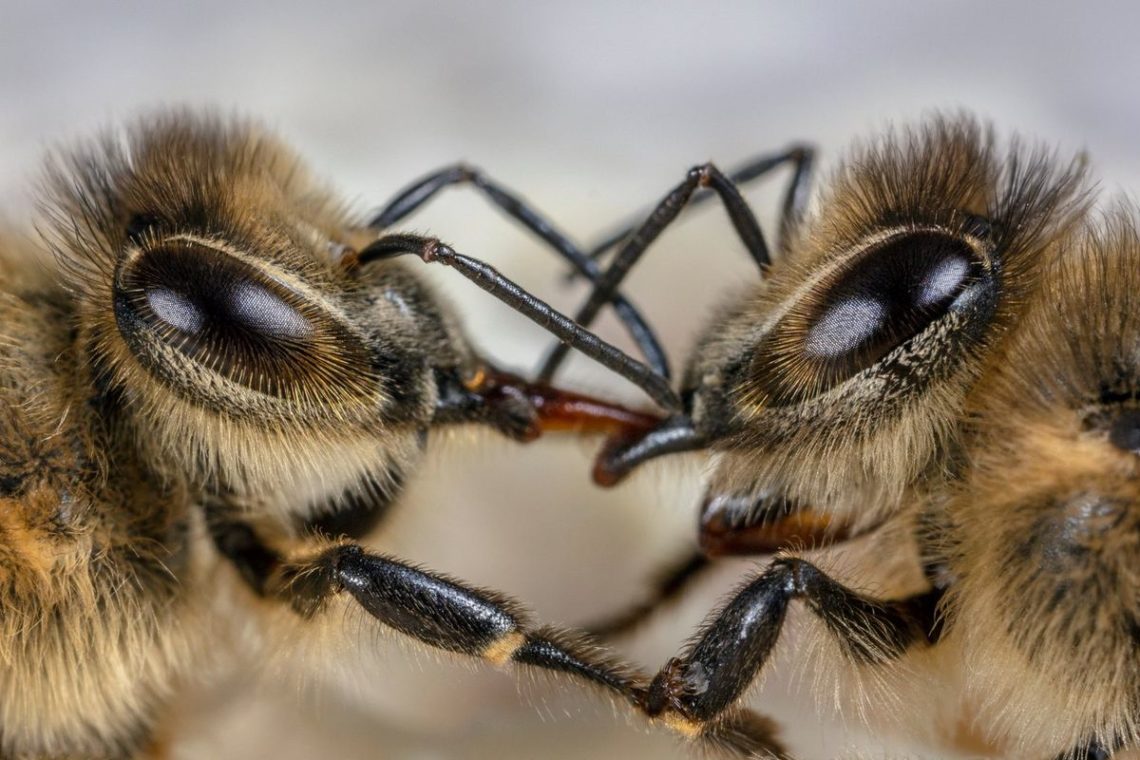 Getting inside the colony

Honeybees are beloved for producing honey and pollinating a wide range of flowers, fruits and crops, but honeybee populations, like those of many insects, are seeing steep global declines. It’s something that drew Ingo’s attention. “You have this dying insect population,” he says. “I wanted to show people the importance of wild honeybees.”

Working with scientists in the forests of Germany’s Hainich National Park, Ingo went to great lengths to photograph western honeybees (Apis mellifera), even climbing 20 metres up trees to reach their nests. “I quickly found out that I could take some good pictures, but the most interesting things are happening inside the nest cavity,” he says. “So, I thought, ‘Let’s try to find a fallen tree, bring it home and put the honeybees inside’.”

Obtaining permission to move a fallen trunk from the forest to his garden, Ingo chose a beech tree with an abandoned black woodpecker cavity in its trunk – a desirable home for western honeybees. He set about building a full photographer’s hide against a gap in the tree – complete with red lighting, not visible to bees’ eyes, so they would not be disturbed by his presence – which would allow him to capture his subjects’ secret lives.

Ingo extracted a queen from a nearby colony and placed her inside the former woodpecker nest. It took just moments for the rest of the colony to follow and for thousands of wild insects to set up home under Ingo’s watchful eye. “I could look inside the nest and take pictures,” he says. “It was really amazing.”

Working with bees naturally brought with it some hazards. “I was stung several times – funnily enough, on the first day, maybe as a warning shot,” laughs Ingo. “Only once was it uncomfortable. The bees had a bad day and fell on me as I approached the hive and stung me six times. It would have been more if I hadn’t run away.” 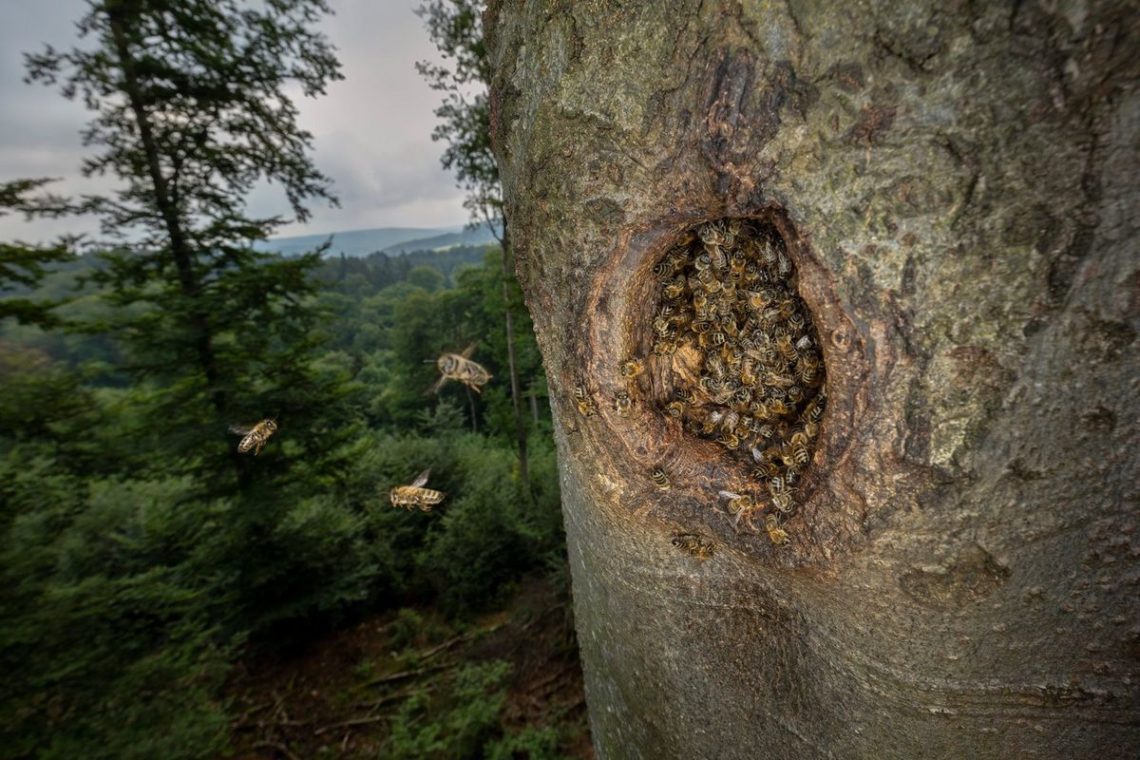 To photograph his tiny subjects, Ingo chose a Canon EOS 5DS R for its 50.6MP resolution. He uses flash for all his pictures, including up to six Canon Speedlite 600EX II-RTs, along with ring flashes and modified softboxes.

“I used the Canon EF 100mm f/2.8 Macro USM lens a lot, and the Canon MP-E 65mm f/2.8 1-5x Macro Photo lens,” he says. “This is a very important lens, because you can go close and get so much detail. I was able to shoot portraits of [individual] honeybees. Together with the flash and the camera, it gives unbelievable detail. For shooting the nest, if I had a bigger frame, I used the Canon EF 16-35mm f/4L IS USM lens and a Canon EF 24-70mm f/2.8L II USM lens.” 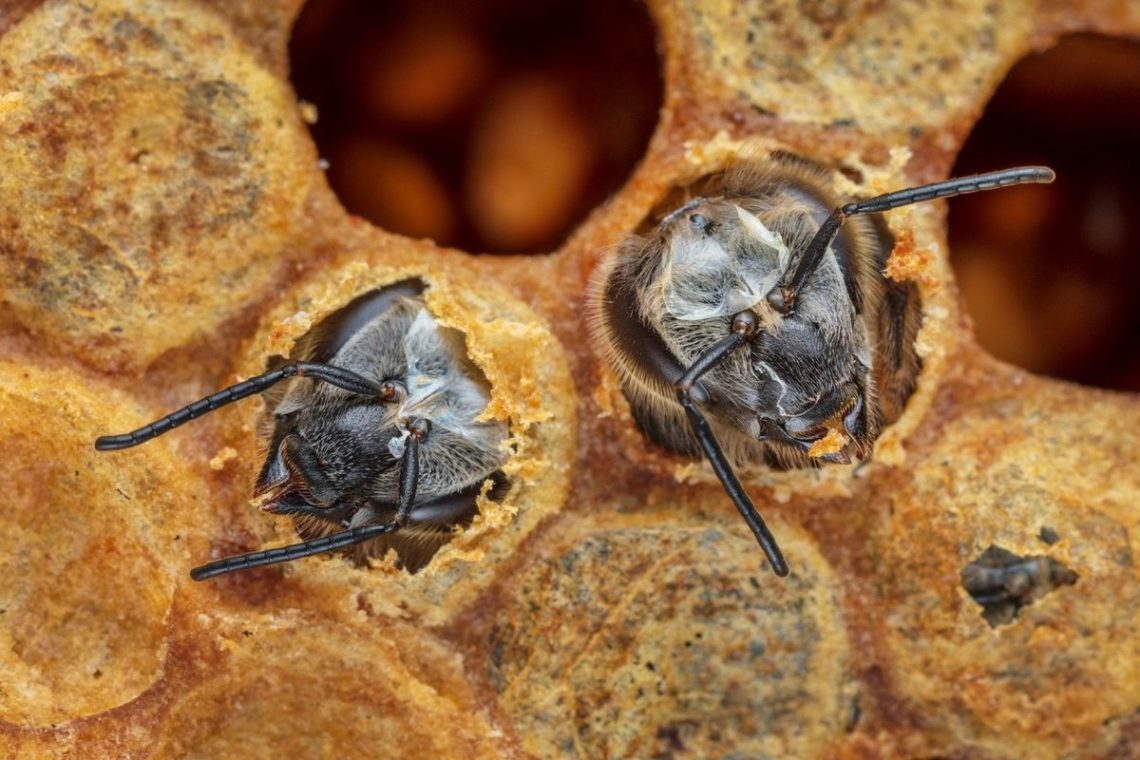 An experienced macro photographer, Ingo has photographed insects across the world, from millions of Monarch butterflies in Mexico to migratory locusts in Madagascar, but it still took some experimentation for him to find the right lighting.

“The honeybees are so small and move so fast that it really isn’t possible to photograph them with natural light,” he explains. “To get good results, you have to play around with the Speedlites a lot. Using many flashes together is always good, so that you have soft light from the front and backlight from the side, and you can create light around the insect’s body.

“Sometimes, especially in the cavity, I was using the flashes like a spotlight, because if you use them as a wide angle, it puts light everywhere and then it looks very flat. If you use it as a spotlight, it is almost mystical, with the spotlight on the most important place.”

Ingo also used flash when shooting outside the nest, moving to softboxes when shooting a bigger frame. When he wanted to get in close, he used the Canon Macro Twin Lite MT-24EX. The flexible twin flash system, which rotates, was a “brilliant tool for the story,” he says.

The majority of Ingo’s shots were taken hand-held because he needed the flexibility to move with the bees. He also used manual focus. “When the bees are moving, like other animals, you have to focus on their eyes,” he explains.

“For macro pictures, if I had enough light, I could use any shutter speed I wanted and get sharp pictures,” he adds. “Most of the time I shot at f/11 or f/16, so the shutter speed was only 1/250 sec. If you shot at 1/250 sec without a flash, the picture would be black, because it’s not bright enough. You only have this very short exposure when the flash fires, which is maybe 1/5,000 sec or 1/10,000 sec. It’s only possible to freeze the moment because of the Speedlites.” 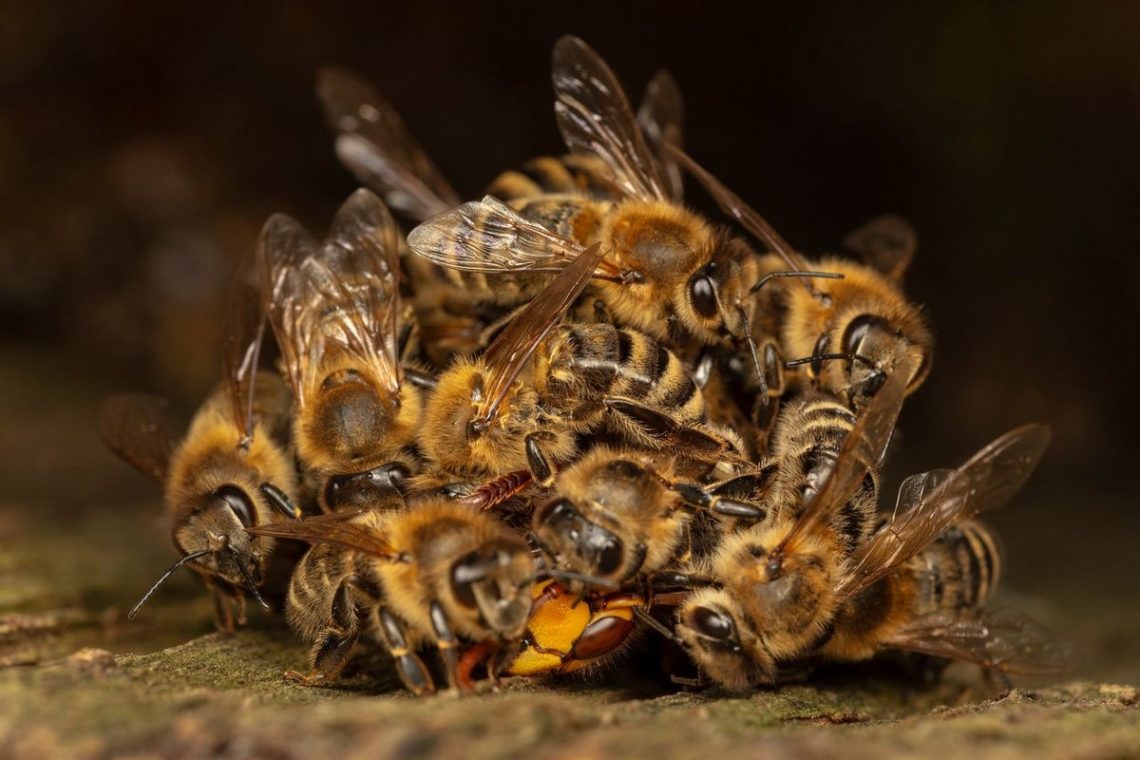 One of the most fascinating series of behaviours Ingo was able to document was the colony defending itself against attack by hornets. Here, bees cover the invader, heat their bodies as much as they can and overheat the hornet, killing it. Honeybees can survive a 1°C higher body temperature than hornets. Taken on a Canon EOS 5DS R with a Canon EF 100mm f/2.8 Macro USM lens at 1/200 sec, f/16 and ISO250. © Ingo Arndt Photography

Revealing the secret lives of bees

Over hundreds of hours, Ingo took thousands of photographs in his hide, outside the nest and in the nearby forests. “Macro photography is not very different from shooting other wildlife,” he says. “You have to shoot a lot of pictures. I think I shot 80,000 pictures for this story, before selecting around 300. I had to try a lot of times before I got the perfect shot. Sometimes a good picture happens by accident, but most of the time it’s a lot of work, experience and knowledge.”

Within this vast body of work, Ingo has revealed a series of never-before-seen bee behaviours. Collaborating with biologist Professor Jürgen Tautz, who specialised in honeybees for around 25 years at the Julius Maximilian University of Würzburg in Germany, he documented bees duelling with attacking hornets, the members of the colony cooling the nest by regurgitating water and fanning their wings, and bees locking their legs to form “living chains” while building honeycombs.

“A lot of research focused on getting more honey out of honeybees, but almost no-one focused on the natural behaviour of the honeybee,” says Ingo. “What I photographed inside the woodpecker nest cavity was never shown before. I sent my photographs to Professor Tautz and every day he found something new which had never been observed. It was amazing how many new things I could show with this story.”

The pair have since published a book, Honey Bees: Mysterious Forest Dwellers, and Ingo is now building upon his stills work with a documentary film showing life inside the honeybee nest.

As international lockdowns set in at the outset of the Covid-19 pandemic, Ingo and his partner Silke were forced to return home early from a lengthy trip in Patagonia. Ingo was greeted by his colony and, thanks to his backyard bees, has been able to document wildlife without leaving his home – continuing to create a portrait of wild honeybees unlike anything seen before. 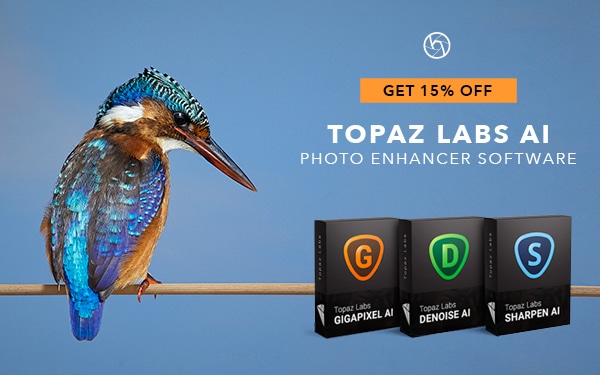 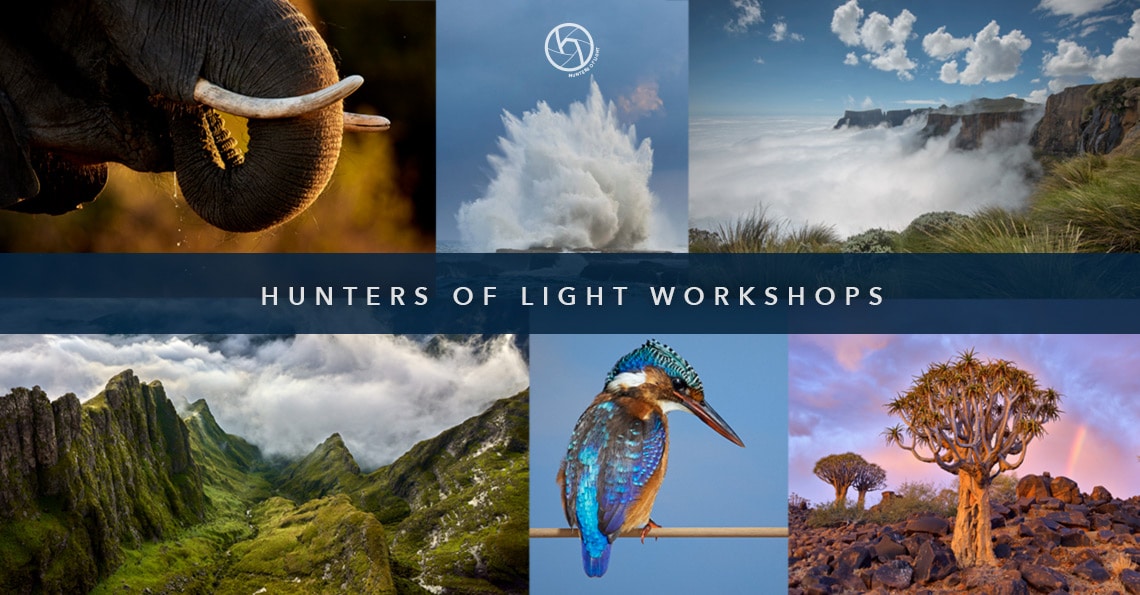